A few days ago, I was lucky enough to meet the bubbling Lindsey Stirling in a cute parisian hotel.

This 27-year old Californian violonist started playing rock at 16 while she was a member of the band “Stomp on Melvin”. But it’s in 2010 that she became famous when she participated to the “America’s Got Talent” show. Her talent? Dancing while playing violin! 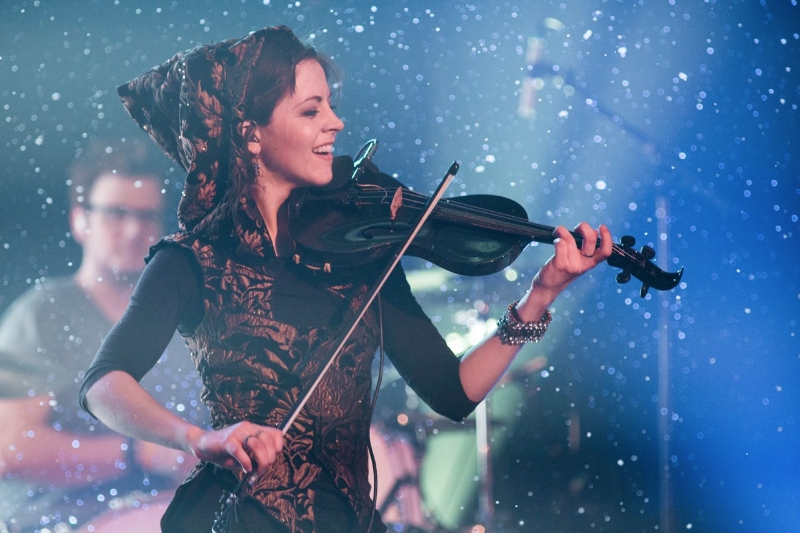 Eliminated in the quarter finals, Lindsey did not give up. The following year, she released her first video clip for the song “Spontaneous Me” on her YouTube channel “Lindsey Stomp“. Since then, her popularity has grown quickly thanks to her covers of movies and videogames soundtracks.

In September 2012, she produced her 1st record containing exclusively original material. At the same time, she created a second YouTube channel called “Lindsey Time” posting funny videos about her daily life as an artist and about her world tour starting in 2013. 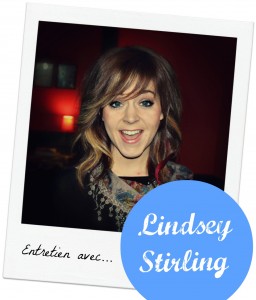 Good morning Lindsey, thank you for welcoming me!

You started by covering songs. Today, you’re releasing an album entirely made of original songs. What inspired you to write?

I’ve always loved writing my own arrangements. But one day, I felt the need to create my own music. It was really enjoyable to get out of the box for the first time. Not customize someone else’s work but ask myself very important questions such as « What is my music style? What do I like? » and mix all of that together. For example, I love classical music. I also like celtic music and electro. It was awesome to take all these genres and see what could come out of the mix. I am thrilled with the result. It’s exactly what I wanted.

How did your fans react to these new songs?

From the beginning, I was alternating covers and original songs. Today, I’m actually keeping the same pace. I’m composing new songs between which I inlay covers. It’s what I’ve always done. Even if a lot of people found out about me through my covers, I realized that they were also fond of my compositions because they were fresh and quirky. To be honest, this record is way more successful than I could have imagined.  I still can’t believe my eyes. And it keeps selling! I’m really happy of how it was received.

You have a lot of success with your Youtube channel Lindsey Stomp too with now over 3 million subscribers. How did that adventure start?

It started when I met the videographer Devin Graham. He owns this YouTube channel called « devinsupertramp » and it’s working really well for him. He noticed me on « America’s Got Talent ». He contacted me through Facebook. He wanted to work with me and he offered to produce a videoclip for me for free! I was stunned. He is so talented and he has so many projects on his plate. Of course, I accepted. We met, we shot the video clip and he put it on his channel. And for the first time, I got paid for my music. He had around 20 000 subscribers at the time. I had tried so many different things to make myself known… I  had done rounds of music labels and artistic agencies in Los Angeles. Nobody was interested!

And all of a sudden, thousands of people were listening to me and were watching my video. I was so excited. I decided that I needed to learn everything there was to know about YouTube. I attended workshops. I did my research. And I ended up creating my own YouTube channel. And here we are… 3 million subscribers later! (she laughs)

You mentioned your experience on « America’s Got Talent ». How has this experience influenced your music and your attitude?

I remember that the jury advised me not to dance at the same time that I was playing violin. They gave me lots of advice I didn’t agree with. I think that participating to this show made me realize that I didn’t want to spend my life covering songs. I did a lot of covers for this show and it wasn’t really fulfilling.  The jury told me that I should stop dancing because I was not good enough to dance and play at the same time.  From this moment on, I decided that it was the last time that someone was telling me that. I decided to work really hard. I work hard till I became good enough, so that nobody could never say that to me again.

Instead of listening to them and giving up, I used their critics to bounce back. For me, it only meant that I had to work harder.

Nope, never. But I’m coming back home in the States soon and I’m gonna have a bit of time for myself. So, I’m gonna take a few lessons. It will be my first dance class! I can’t wait to learn new moves and to practice, to become more graceful. 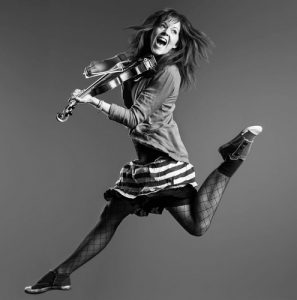 You are really present on the social networks and you often post pictures from your childhood. It seems that you had a pretty sweet childhood. What memories do you keep of this time?

I had a wonderful childhood. My parents were encouraging us to express ourselves. My mother was not working and she was spending a lot of time with us, organizing activities, doing arts & crafts, nurturing our creativity. I remember being a child, she taught me how to create outfits for my stuffed animals. We were also painting together. I owe a big part of my creativity to my mom and to my parents in general. They were so supportive. It takes forever to parents to plan fun stuff to do or even just to clean up after kid’s creative projects. It was really important for my parents. They had a few financial issues. Even despite that, I had an awesome childhood because we were really close.

Your creativity comes from your parents. Where does your passion for music come from?

Also from my parents. They were not musicians but they loved music. When I was a kid, we were listening to classical music all the time.

Not dubstep, I guess!?

Haha, not dubstep, no! I’m the one who was listening to dubstep. But they were playing a lot of classical music and that’s what makes me want to learn to play the violin. When I was 6, I begged my parents to take violin classes.

And if you could have learnt another instrument, which one would you have chosen?

I can only play violin but I would have loved to learn piano or guitar. These are convivial instruments. You play and everbody sings along. I love that.

Let’s dive into more recent memories. What is the most incredible person you’ve met now that you are famous?

I had the chance to meet Michael Bublé. You must know that he was a bit of a celebrity crush for me. It was awesome to meet someone that I admire. He was so charming, so genuine. He is also really funny. As delightful in real life as he is on stage!

Any anecdote during the tour?

I remember one time when we were touring in the States. A couple sent me an email to tell me about their daughter Sarah who was undergoing chemotherapy. She was a fan of my music and she was extremely disappointed not to be able to come to the show because she was in the hospital at that moment.  All her friends were going to the concert and she was really sad not to go with them.

So, on the morning of the show, I went to the hospital with one of my friends. I brought my violin. We surprised her and I played a few songs. We stayed a moment with her. Then, during the show, all her friends were there, close to the stage and we made a dedication “We so wish Sarah was here tonight!”

Then, I went back touring and when we came back by Sarah’s town for the tour, she was at the show! She had hair again and she was feeling better. The chemo worked. It was wonderful to see her healed. She is such a strong girl! I think it’s the most awesome thing I’ve lived during the tour.

Lastly, we are going to use those creativity skills you were talking about earlier. I know you like role-playing games. This looks a bit like that. We are going to play characters…

First, let’s imagine that I’m a writer and that you are a fictional character. You can be anybody. What’s your story?

Um, I would be… a young peasant woman with beautiful long hair. I would live during the Middle-Age. I would work in my father’s store. I would help me, arrange the flowers in his store. And I think I would sing. I would sing really happy songs and the prince living in the castle nearby would hear them. He would come to me and would try to impress me.

Would that end up in a wedding?

Of course! (she laughs)

Right, I’m writing the book and sending it to you!

Now, let’s say I’m a young musician and I want to become a star like you. What’s your key to sucess?

A lot of things that I’ve done were clearly strategic, to promote my music. It’s tough to start from scratch and try to launch your career. I would say that the key word to success is “collaboration”. First, create some content you’re really proud of and use it to get collaborations. Work with other artists, a tiny bit more famous than you are so that you can share fans et help each other grow. It’s one of the things that have helped me the most when I was starting out.

You also post tons of funny videos on your YouTube channel “Lindsey Time”. That brings you closer to your fans. They think of you as a friend. It certainly influenced your musical career. Where do you find the time to release these videos?

It’s for sure a challenge to create content especially when you’re touring. But I now have some help to do that. There’s someone that follows us on tour and capture the fun or important moments. That person also edit the videos so that’s a huge help! Before, I was trying to create very sophisticated videos and I don’t know if you noticed but they became simpler and simpler over time because it was the only way for me to produce more videos. I agree when you say that these videos bring me closer to my fans because they feel that we are “connected” and that they know me. They are so loyal and so supportive. When I meet them, I have the feeling I’ve already met them and they feel the same way.

If you could create a new holiday, what would it be?

I would create a “Beauty Day” where people are supposed to celebrate all forms of beauty. The media impose their own vision of beauty when there are so many “beautiful” personalities, styles, looks. I think that a day to celebrate your own beauty and others’ beauty could be nice to have.

Thanks for answering to my questions, even the weirest ones! ;)

When will you be back in France?

We will be back next summer!

And to buy Lindsey’s first album, it’s down there:

A huge thank you to David & Sandra for this interview! :) 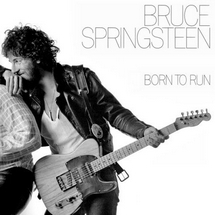 La Brucette is a music blog with plenty of stories and anecdotes. 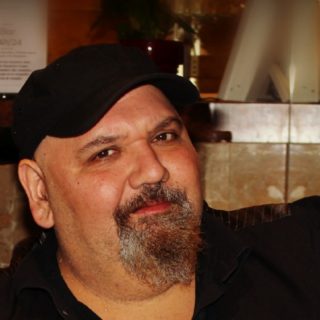